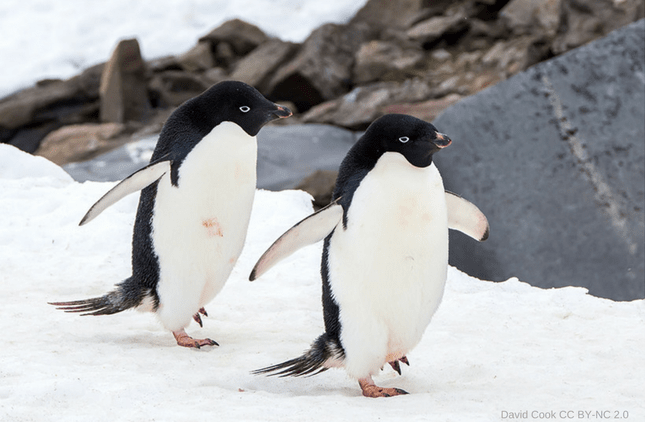 In March, researchers announced the discovery of a ‘super colony’ of Adélie penguins hidden amongst the remote Danger Islands off the northernmost tip of Antarctica. The colony’s existence was confirmed using satellite imagery, and scientists estimated its size using the latest drone technology and neural network software.

Finding roughly 1.5 million penguins thriving in this region—especially since their kin in the western Antarctic Peninsula are suffering population declines—should be a good news story, right?

The discovery certainly received a great deal of media coverage. The news that Adélie penguins as a species are in better shape than researchers previously thought should give us renewed hope and inspire greater support for two planned marine protected areas in the Danger Islands, which would help safeguard this newly found penguin colony from human encroachment.

Yet, although this discovery has raised morale for many wildlife biologists and environmental conservationists, it has also sparked vitriol from science scoffers and professional trolls.

A scroll through the comments section in The Independent’s coverage of the story shows just how wide the gap is between what scientists do, and what people think scientists do. Many of the comments revolved around scientists being incompetent and stubborn, such as this one:

The comment highlights one of the most common ways people misinterpret science. The commenter seems to imply that science is a farce because scientists thought they knew how many penguins existed. This new discovery shows that they did not. Therefore, science cannot be trusted. The thing that haters don’t seem to understand is that science is built on a foundation of continually evolving ideas based on introduction of new evidence. Science is not static, it seeks to hone theories and improve our understanding incrementally as we gather more and more information to support or refute ideas.

Science is not a religion that scientists proselytize (at least, not for most of us); it is a framework for continually improving our understanding of the world. Scientists had a prior estimate of penguins based on evidence at the time. That estimate has now been updated based on the introduction of new evidence. That’s exactly how science is supposed to work. Discovering that the Adélie penguin population is larger than previously thought in no way negates the thousands of lines of evidence documenting climate change impacts. Neither does it imply that Adélie populations elsewhere aren’t suffering declines. It simply increases our baseline knowledge and allows for more accurate population modeling.

Another comment illustrates another common misplaced complaint about science—that because scientists didn’t know about this penguin colony, they obviously don’t know what they are talking about with anything else, including climate change; their research can’t be trusted:

First of all, I don’t think the commenter understands just how remote and rugged the Danger Islands are, located in a turbulent, difficult to reach part of the Southern Ocean. They aren’t called Danger Islands for nothing. Even if researchers had been able to locate the colony via satellite imagery long before now, they would have struggled to estimate the population size without the drone and software technologies that have only recently become widely available (and affordable).

Second, the commenter falls into the all too common trap of false equivalence: slick scientists tell us climate change causes ice to melt, but this penguin colony is surrounded by ice. Therefore, climate change must not be happening, so Ha! This argument fails to acknowledge the many known intricacies of global climate change, including the fact that while some areas of the planet are steadily warming (and ice is melting at worrisome rates), other areas are still fairly stable or even experiencing more extreme cold weather patterns. The point that seems to get buried beneath layers of ideology is that climate change is creating a more volatile climate system across the planet, and this is well documented.

The equipment to measure greenhouse gas quantities and origins has existed for decades, and climate models are becoming more and more accurate every year. We know, for example, that the Arctic sea ice minimum, which occurs around September each year, is declining at a rate of about 13% per decade. Arctic winters are also warming steadily at an alarming rate—just last month researchers documented an unprecedented heat wave in the region. As this heat invades the Arctic (due to rising ocean temperatures and sea rise), cool air is pushed south causing extreme cold-snaps in northern temperate latitudes.

And it’s not just the Arctic. A NASA study using innovative data analysis techniques to interpret satellite data has provided the clearest picture yet of changes in Antarctic ice flow. The study found that ice loss is accelerating on the West Antarctic ice sheet, while remaining steady in the east. This evidence actually helps explain why ice-dependent Adélie penguins seem to be doing so much better in the Danger Islands than their Western Peninsula counterparts.

Where all the rich climate scientists at?

Of course, one could argue that all of these thousands of climate scientists (who are a completely different group of people than the marine biologists that discovered the penguin colony, by the way) are just in cahoots to keep the grant money flowing in and their pockets overflowing. Except that they aren’t. But the argument keeps getting made, often with the implication that academic researchers are all part of one big conspiracy to ruin the world for everyone else:

I hate to break it to you, but neither I nor any of the scientists I know sought an academic research career because of the promise of dollar signs or job security (less than one third of faculty at public universities are tenured, e.g.). Most climate scientists work at academic institutions, government agencies, or NGOs and earn less (sometimes a lot less) than $100,000 per year. Even U.S. college professors only earn on average $75,000 per year. Sure, that’s nothing to scoff at. But it’s hardly even worth comparing to the millions of dollars these folks would be pocketing each year if they had opted to work for, say, a multinational oil company instead of a government agency or university.

Besides, when you add in the average combined undergraduate and graduate student loan debt of around $70,000, and the six to ten years of courses and research it takes to earn a PhD, it becomes harder and harder to argue that climate scientists are in it for the money. And it doesn’t get much better once you graduate—nearly half of U.S. PhD recipients don’t have a job lined up at graduation. Those that do often accept post-doc positions that pay an average annual salary of $40,000. The number of tenure-track positions is shrinking every year, and competition is painstakingly stiff for those that remain (one of my good friends recently applied for an academic position and learned that nearly ONE THOUSAND other similarly qualified people also applied).

What’s more, U.S. grant money for climate change research has remained relatively flat for the last twenty years, hovering around a total of about $2 billion coming from 13 different agencies and spread out among thousands of individual research grants. Compare that to the annual budget of the NIH at more than $30 billion, or the yearly profit of Exxon at $16 billion. Research science is not a career you choose to be rich and famous. It’s a career you choose because you are innately curious or passionate about solving problems (or maybe you have a masochistic bent). For more on what really happens to grant money awarded to climate scientists, check out this video by climate scientist and Evangelical Christian Kathryn Hayhoe.

Climate scientists may have deep pockets, but they’re filled with crumbled sticky notes and candy wrappers, not hundred-dollar bills.

How do we build a bridge between science and society?

Russian trolls and paid nay-sayers aside, scientists obviously have some work to do to more clearly communicate how they do science, what processes they use, and why their work is relevant to society. The field of science communication is rapidly growing and maturing to help on this front, but we still have a long way to go. It’s not just about doing away with jargon and simplifying complex concepts. It’s about connecting with people who have different values and worldviews. As Lisa Saffran writes in Scientific American:

“No matter how clear the findings and how scientifically literate the audience, if the information poses a threat to one’s identity then the scientist might as well be speaking, well, Greek.”

Saffron is referring to the way our social identities influence our perceptions and attitudes about environmental issues. Whether we admit it or not, our political, religious, and cultural allegiances strongly impact the way we respond, whether positive or negative, to information about things like climate change.

Scientists and science communicators must therefore hone their ability not only to translate scientific language, but also to listen to others and hear their concerns, and to engage them in discussions about what matters to all of us—such as the health of our families and communities.

As tKatharine Hayhoe puts it, “We live in a situation now where the fear of solutions is greater than the fear of impacts.” People are driven by fear, particularly the fear of losing their freedom of choice, and respond negatively to issues that might best be addressed at large government scales.

Fortunately, science storytelling is becoming recognized as an important way for scientists to connect with non-scientists and lay bare their own fears, hopes, and motivations. Dozens of training workshops, such as Story Collider, help train scientists to tell stories about their work that are accessible and interesting to public audiences.

Science education also needs to become a greater priority in schools and universities, with a particular focus on engaging students from diverse backgrounds and reducing barriers to obtaining a STEM (science, technology, engineering, math) education. As important will be teaching students to ‘think’ scientifically—i.e., to train people to “be their own science referees—that is, to understand how science works, and to identify baloney when it’s slung at them,” as Mike Klymkowskly writes in a blog about science education.

Klymkowskly argues that a lot of the public misunderstanding around science comes down to the way that science is taught and popularized. Teachers, books, shows, and movies about science tend to de-emphasize the process and instead focus on schnazzy facts and outcomes. I don’t think programs like Nova or Planet Earth are doing a disservice to science just because they focus on ‘wow’ factors, as Klymkowskly seems to imply. But I do think we have a responsibility to de-mystify scientific processes (because there are many), teach the history of science, and emphasize the importance of critical thinking in all fields of learning.

The Moral of the Science Story

What can we take away from all this? One, there are way more penguins in Antarctica than we previously thought (yay!). Two, climate change is still happening (Boo!). Three, scientists need to do a better job of communicating to non-scientists not only about scientific research, but about how the scientific process itself works.

We are all born curious, with a desire to understand the world around us and find our place in it. Most of us are also driven by an innate desire to make the world (or at least our immediate surroundings) a positive, safe space for ourselves and loved ones. Science is one framework through which we can gather evidence and refine ideas to do both of these things, but it must be made more accessible to diverse groups. We as scientists (and communicators) must work to depoliticize and clarify issues like climate change so that we can work with society to find common solutions, as well as common ground.