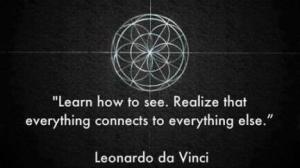 This series of blogs is all about connectivity, and in that spirit I’ll be discussing several stories over the next few posts that have caught my eye recently due to their overlapping significance. I always find that when I am inspired to share a particular article, I start to find many related stories that tie it into the bigger picture of existence. That’s just how our mind’s work—everything we perceive is based on context. In fact, context can be so influential that it deceives us into seeing things that aren’t really there, or not seeing things that are!

Indeed, scientists at University College London have found that we tend to think we see objects, even when they aren’t there. This phenomenon is particularly strong when both the object we think we see, and the surrounding context, are vague. In other words, our brains fill in the missing bits based on past information to construct a ‘rational’ image, based on what we would expect. The thing is, our brain’s don’t always get it right. One only has to consider the imaginative, fearsome creatures our minds turn ordinary objects into in the dark of night, or the susceptibility of our eyes to the illusions of magicians with quick hands—even when we know the secret to their tricks.

The ties that bind

But today’s post is not about how our minds play tricks on us. It’s about how ‘everything is connected’, both literally in the ecological sense, and figuratively the sense of how we bring meaning to our lives—as a recent NPR story so eloquently explored (I highly recommend if at all possible that you lay in a comfy spot, close your eyes, and listen to the entirety of this episode to gain a meaningful, and perhaps new, perspective on life).

One of the highlights of this episode for me was an interview with Bernie Krouse, a musician and founder of Wild Sanctuary. Bernie has been recording the soundscape of various ecosystems for a number of decades, capturing the chorus of biotic and abiotic sounds that act like a unique fingerprint identifying each ecosystem. In an undisturbed habitat, the sounds reach a crescendo in which every sound seems to play an important part in the overall orchestra, completely in tune and in harmony.

But such natural symphonies are becoming increasingly rare. Alarmingly, Bernie’s recordings document the steady decline in complexity of sounds in nature, and the related loss of numerous species (and their symbiotic interactions), as habitat destruction and disturbance have grown. He has documented sounds that no longer exist in nature—certain bird calls, cricket chirps, and wolf calls that are only haunting memories of a disappearing natural world. While I know quite a bit about the rate and causes of current ecological degradation, I admit that before listening to this segment I had never considered the role that sound recordings might play in both documenting the loss of ecosystem integrity, and helping us more holistically quantify the impacts of that loss on ecological communities.

The next NPR segment of this same episode spotlights Marla Spivak, a bee researcher from the University of Minnesota. I was already quite familiar with the plight of bees, the severe loss of bee colonies across the globe, and the consequential threat to agriculture worldwide. Still, this segment was heart-wrenching. More than a third of the crops we rely on for food are pollinated by bees—from apples and blueberries to squash, pumpkins, tomatoes, and even coffee. Yet because of our recent shift to industrial agriculture, with its large-scale dependence on monocultures and pesticides, we have been steadily wiping out essential bee habitat and poisoning the very bee colonies that we rely on. 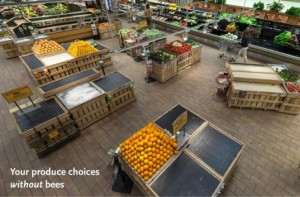 In California alone, the almond industry relies on approximately 1.6 million bee colonies every year to pollinate almond trees. Whereas bees used to be an ecosystem service naturally available to farmers, these days they must be trucked in seasonally by beekeepers, and then trucked out again shortly after to avoid exposure to pesticide spraying. Even with this extra (and might I add, expensive) effort, bees are being exposed to lethal toxins—every batch of pollen that a honeybee collects has on average eight different pesticides in it—and we are losing bees at an exasperating rate. Even with increasing evidence that neonicotinoid pesticides are a significant factor in bee deaths, the EPA continues to approve new such pesticides. The European Union, meanwhile, has placed a two year moratorium on the use of neonicotinoids in light of their potential damage to bee colonies.

Without bee pollination, many crops would fail. Others would need to be pollinated by human hand. In some cases, tomato farmers have already had to resort to this. They use a device called a ‘tomato tickler’ (seriously!) that vibrates within the male tomato flower coaxing it to release its pollen. It may sound “stimulating”, but apparently this artificial process is not nearly as effective as when the bees pollinate tomatoes, which they do by vibrating their bodies at a rate close to the musical note C. The lesson is that nature has evolved to be extremely efficient, and when we disrupt the harmony of symbiotic relationships, we not only create great imbalance, but we lose vital ecosystem services that provide the foundation for our entire economy and well-being.

The disappearance of bees, and many other species, is likely to leave one with a feeling of despair; at least one with any understanding of human-nature links or an empathetic vibe. But what keeps me, personally, from flinging my hands up in hopelessness are the stories of action: action to prevent ecological destruction, to protect the environment and uplift society. The acts can be quite simple. In fact, simplicity can often be the most effective approach. Marla, the bee researcher, for example simply torched her front lawn—literally—and converted it to a small field of wildflowers for bees to pollinate. Interpreted by the city of St. Paul as an act of defiance against perfectly manicured lawns everywhere, Marla was issued a citation. What did Marla do? Threw the citation out, and posted a sign in her yard that said ‘pollinator habitat’. After the first season of blooming, her neighbors began to marvel at the beauty of her little wild patch. And she never did pay that citation!

In my upcoming blog posts, I will continue to explore this connectivity between individuals, society, and the environment by discussing two video clips that have recently made the internet rounds and struck me as note-worthy, thought-provoking media. They focus on the need for social change through shifts in gender roles, recognition of indigenous knowledge, and empathy for distant human beings as well as other species and the biosphere in general.

Our world is in turmoil. The more we learn about our selves and the earth, the more we are destroying the tenuous links between everything. But there is an inspiring countermovement arising on many fronts—scientific, social, religious, community-based. Individual acts of ‘defiance’ and ‘revolution’ that might just bring us closer to each other and our selves in a more positive way.

More on this next time!